DRAGON'S CROWN!​
The Four-Player Fantasy Adventure Side-Scrolling Game of GOOD GOD IS THAT A SWORD IN MY CROTCH?!​
​

​
PLATFORM: Playstation 3​
Price: 49.99​
​
Alright, let's get down to brasstaxx. I've been playing this game with my girlfriend since last night and I must say it is one of the best adventure games I have EVER played. It meshes the ongoing narrative and choice of a Dungeon's & Dragon's campaign with the senseless violence of a side-scrolling slasher. Did I mention there's also puzzles, loot, PANTHER MOUNTS, loot, DINOSAUR MOUNTS, loot, loot, and well, more fucking loot.​
​
I know this game got a lot of flack for it's decision to over-emphasize sexuality in it's protagonists but it really works. The art is fabulous and between you and me, the people who bitch and moan about "over-sexualized" characters in a stylized fantasy game can suck my hammerhead. The art is obviously tongue-in-cheek and my girlfriend got a kick out of the monstrously breasted Sorceress but ended up rolling with the Elf to compliment my beefy Dwarf.​
​
Combat, HO!​
The combat in Dragon's Crown is fun, addicting and visceral. It's one of the few side-scrolling slashers that actually makes you feel like you're doing something and not just another body in the tidal-wave of crap on the screen. Combat is fluid and intuitive, and most importantly loads of fun. Bosses are hard, minions can zerg you and there's friendly fire! The friendly fire just knocks you down, I THINK, I haven't explored that yet.​
​

​
​
LOOT YE SAY?!​
The loot is plentiful and awesome looking. I've only hit level 3 and already my Dwarf has a pair of the most badass hammers I've ever seen. There's random glints on each map that when clicked upon yield fat piles of coin, relics, etc that earn you score. Score earns you experience points, and that levels you up. SO LOOTS MATTER. There is also standard equipment loot such as new weapons, armor, potions, trinkets etc. You have to have all this appraised to see what it actually does and it can be quite a bit of a gamble early on as you're not swimming in coin. When it turns out good though, man do you get some cool shit.​
​ 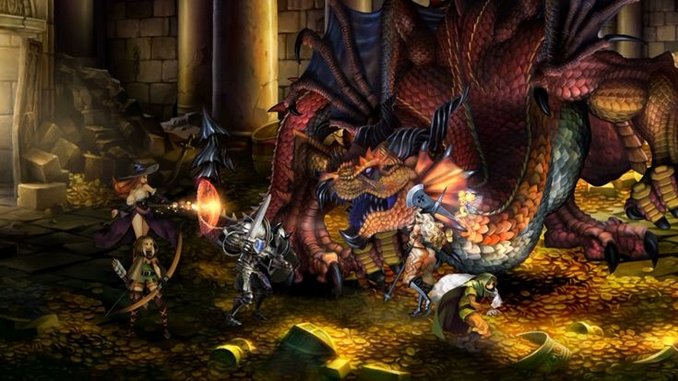 ​
​
Play With Your Friends!​
Well, the best part of this game by far is the fact that it's a four-player co-op game. There's six classes to choose from and you can make one hell of a stomping party with any combination of them. Hell, you can even opt to swing four Dwarfs and pound everything in oblivion in a booze filled, bearded nightmare. There's player collision and you can beat on your partners if they're fucking around too much. Many times I found myself picking up my girlfriends Elf in my meaty Dwarf paws and charging at a horde of Orcs to throw her into the fray for splash damage and laughs. Did I mention it was online?​
​

​
​
This wasn't really a review, I just want more people to play with. SO EVERYONE, BUST OUT YOUR CHECKBOOKS AND THROW SONY YOUR MONIES AND JOIN THE ADVENTURE!​

What platforms is this for? Sounds like it isn't free. How much is it? Also, this thread needs more boobie shots.
Click to expand...

I tried to keep it as SFW as possible, which is REALLY damn hard with this game. It's for PS3, will probably release for Steam soonish but you're right, it's not free by a long shot. Comes with a 49.99 price tag, but it really is worth the price.

Yeah, keep it SFW. I just like the art style.

$50 is a lot for me right now. I have to keep the wife happy so I can buy WS right away regardless of price.
Click to expand...


The art is really what sold me. I agree that 50 bucks is steep, but this game looks to have enough content to hold me over 'til Wildstar drops. It's loads of fun, I do see it dropping to 30$ soon though, I don't think it has the chutzpah to stay at 50.

BONUS: My girlfriend digs the game and it's got local co-op as well as online.